Norway is located in Northern Europe and is a part of the Scandinavian Peninsula. The majority of the country shares a border with Sweden in the east and its northernmost region is bordered by Finland. With a population of over 5.3 million, covering 323,802 square kilometers, Norway is one of the most sparsely populated countries in Europe.

Norway has one of the most financially healthy economies in the world, in part due to its status as the world’s 11th largest exporter of crude oil and 3rd largest exporter of natural gas. It has a GDP of $403 billion in 2019, which has been decreasing the past several years. Other major industries, such as shipping, shipbuilding, fishing and fish farming, information technology, pulp and paper products, and light metals processing have prospered as well. Incomes are also more evenly distributed, making every person a consumer, unemployment rates and interest rates are low. 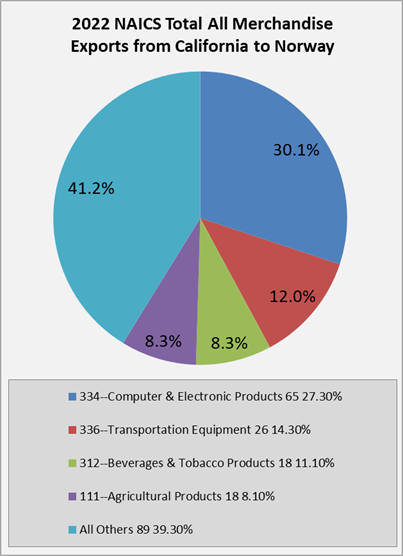 In 2019, Norway contributed $22.7 billion in direct investment to the U.S., while U.S. direct investment in Norway totaled $25.5 billion the same year. Norwegian FDI supported 7,900 jobs in the US and contributed $41 million to research and development, along with $223.8 billion in expanded US exports. Top industry sectors of Norwegian FDI were: software and IT services, transportation, metals, industrial equipment, business services, and chemicals. Select USA

Norway and California are both west coast economies with a beautiful coastline. There are approximately 400,000 individuals of Norwegian descent living in California. UC Berkley has strong ties with Norway via the Peder Sather Center for Advanced Study. Peder Sather (1810 – 1886) was a prominent Norwegian-born American banker who is best known for his legacy to UCB. His widow donated funding in his memory for two of the school’s most famous landmarks, Sather Gate and Staher Tower, which is more commonly known as The Campanile.  The Norwegian Consulate In San Francisco opened in 1906.  Earl Warren, former California Governor and Chief Justice of the United States was of also Norwegian descent.

Minifacts about Norway 2015 (from Statistics Norway)

Facebook-stream from The Royal Norwegian Consulate General in San Francisco

The numerous areas that affect trade and investment between Norway and California were the subject of a lively exchange on September 15, 2016 at a luncheon meeting between the California Chamber of Commerce, Parliament of Norway, Consulate General of Norway, and the Northern California World Trade Center. The lunch was part of a weeklong tour of Northern California by the Norwegian Parliamentary Standing Committee on Commerce and Industry.