Nicaragua is a country with a geographical size slightly smaller than the state of New York in Central America and the Caribbean. The World Bank classifies Nicaragua as a lower middle income country with a gross domestic product (GDP) of $12.52 billion. The population was recorded as approximately 6.54 million people in 2020. Nicaragua is the poorest country in Central America and the second poorest in the Western Hemisphere. World Bank, CIA

Nicaragua’s economy has improved since 2006, due to the increase in exporting capabilities with the implementation of the Dominican Republic Central America Free Trade Agreement with the United States. The United States not only has an established trade relationship with Nicaragua, but there are also flows of investment across their borders. In 2019, the United States had a total of $82 million in foreign direct investment (FDI) to Nicaragua. In 2019, Nicaraguan FDI flowing into the United States was undisclosed (Bureau of Economic Analysis). The United States is currently Nicaragua’s largest trading partner, as their largest export destination and their largest importer of goods. Nicaragua has a history of exporting agricultural goods, such as coffee, beef and sugar. They also have exported valuable metals like gold and silver. However, Nicaragua also has a large export market of manufactured textiles. US Department of Commerce, BEA 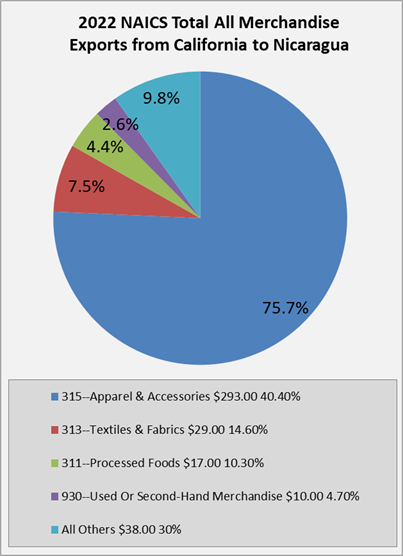 In 2020, the United States imported $3.56 billion worth of goods from Nicaragua. 39.2% of those goods were apparel manufacturing products, which totaled $1.39 billion. Other imports from Nicaragua included primary metal, food manufactures, and transportation equipment. The United States also exported $1.4 billion worth of goods to Nicaragua in 2020. The key exports to Nicaragua included oil and gas, petroleum and coal products, textiles and fabrics, and apparel. US Department of Commerce

The United States trade deal with some of the small developing countries in Central America was signed by President George W. Bush in 2005 as an expansion of North American Free Trade Agreement for the US. Members of this free trade agreement include the United States, Costa Rica, El Salvador, Guatemala, Honduras, Nicaragua, and the Dominican Republic. This trade agreement has led for this group to become the US’s 16th largest trading partner in commodities. Exports from the United States to this group of countries totaled $29 billion in 2015, while imports totaled approximately $24 billion. This trade agreement ensures that 100% of goods from the United States are not subject to tariffs in these countries, it also has a goal of phasing out all tariffs on agricultural products by 2020.