Morocco is slightly geographically larger than California. It is in between the Western Sahara and Algeria in North Africa. The capital of Morocco is Rabat, which is bordered by the Atlantic Ocean. Morocco has a population of 36.4 million people and a gross domestic product (GDP) of $119.7 billion. Due to its proximity to Europe, Morocco has created strong trade relationships and promotes an open market economy. In 2019, the US had $406 million in foreign direct investment (FDI) in Morocco. World Bank, BEA 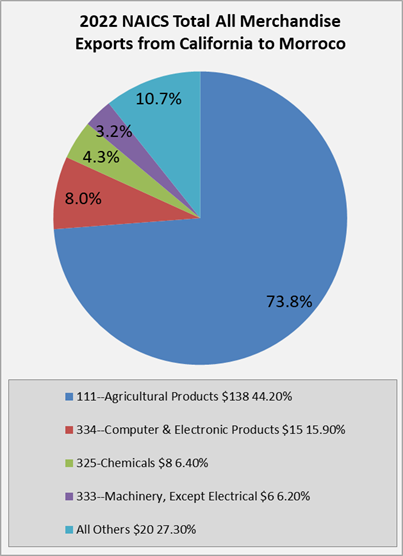 The United States is one of the largest importers of Moroccan goods. In 2020, the US exported roughly $2.3 billion worth of goods to Morocco. The largest category of exported goods was transportation equipment, which made up 28% or $643 million of the total. Other exports to Morocco to the U.S. included petroleum and coal products, food manufactures, and oil and gas. In the same year, the United States imported $1.047 billion worth of goods from Morocco. The main imports from Morocco were chemicals, food manufactures, transportation equipment, and apparel manufacturing products composing around 32.5%, 16.7%, 12.4% and 10.3%, respectively, of the total. US Department of Commerce

California exported $139.16 million worth of goods to Morocco in 2020. The key exported product categories were agricultural products, computer and electronic products, chemicals, and non-electrical machinery. Agricultural products, the largest, had a value of $94 million and made up 67.6% of total exports. Out of the states, California is the second largest importer of Moroccan goods. In 2020, California imported $108.28 million of various goods from Morocco. 33.7% of those goods were food manufactures with a value of $36.5 million. Some of the other major imports were apparel manufacturing products and computer and electronic products; making up about 23.4% and 22.7% of total imports, respectively. US Department of Commerce

Morocco has sustained a substantial level of economic growth annually. The report mentions that the FTA with the United States has opened up the market access for Moroccan non-agricultural products, excluding textiles and clothes. The majority of agricultural products are traded free of duty and some enjoy tariff preferences. The report also mentions the open strategic dialogue between the two countries to further and improve the economic relationship.

The United States- Morocco Free Trade Agreement was signed in June of 2004. Its implementation began in the beginning of 2006. It was economically beneficial for both sides with the elimination and reduction of trade barriers. 95% of tariffs of bilateral trade between Morocco and the United States were eliminated with the agreement. All tariffs were to be phased out after nine years. Five years after the FTA’s implementation, the US exported $2.8 billion worth of goods to Morocco and the trade surplus with Morocco was $1.8 billion, which was a dramatic increase from the $79 million the year before the FTA was enacted.