Mongolia is a landlocked country south of Russia and north of China. With an area of approximately 604,200 square miles and a population of 3.22 million, it is the most sparsely populated country in the world. Although Mongolia is three times larger than California, it has less than 8% the total population of the state. Mongolia became a member of the WTO in January 1997.​ 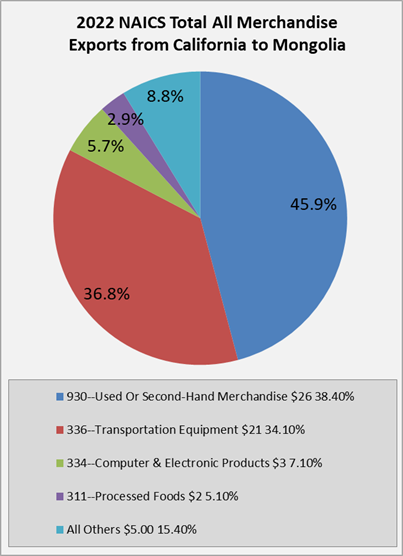 As California’s 88th largest export destination, Mongolia imported $39.3 million in goods in 2020. California is the U.S. top state exporter to Mongolia, making up 33% of all U.S. exports. Top export categories from California to Mongolia include transportation equipment, used or second-hand merchandise, chemicals, and food manufactures.

According to the most recent figures, U.S. direct investment to Mongolia totaled $132 million in 2019 (Bureau of Economic Analysis).

“This agreement represents an important milestone in the U.S.-Mongolia trade relationship. I know that Minister Bold shares my belief that an agreement setting forth mutual commitments on transparency will help to improve and deepen that relationship, to the benefit of both of our economies and our businesses and workers,” Ambassador Froman commented. “Transparency is critical to the proper and efficient functioning of the international trading system. Producers, suppliers, exporters and investors need the predictability that comes with a clear understanding of the policies and practices that are going to be applied.”

Mongolia has been internationally recognized as one of the finest cashmere producers in the world due to the success of its semi-domesticated goats, which are adapted to its harsh climate. After China, Mongolia is the second largest cashmere producer in the world, producing approximately 30% of the world’s supply. Mongolia is looking to expand its market further and is seeking to connect with foreign consumers. Successful cashmere companies include Gobi Corporation, Goyo Cashmere, Buyan Cashmere, and Altai Cashmere.