Jordan is a small country in the Middle East between Israel and Iraq. The capitol of Jordan is Amman. Jordan has a population of 10.1 million people and gross domestic product (GDP) of $44.5 billion. Though the World Bank classifies Jordan as an upper-middle income country, it has one of the smallest economies in the Middle East. Therefore, Jordan has retained a heavy reliance on foreign trade and assistance for resources and economic stability. For example, the United States had approximate $179 million of foreign direct investment flow into Jordan in 2019 (Bureau of Economic Analysis). 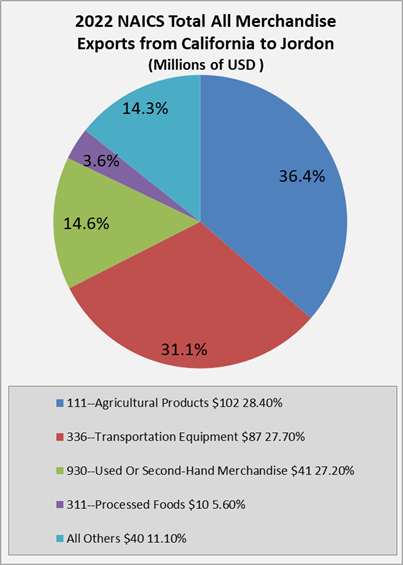 In the early 2000’s, King Abdullah II of Jordan expanded foreign trade relationships to bolster Jordan’s economy. He began trade deal discussions and privatized state owned companies to attract investment. The United States and Jordan established a free trade agreement and it was put in full effect in 2010. The United States is one of Jordan’s top trading partners, being Jordan’s top export destination. The United States imported $1.8 billion worth of goods from Jordan in 2020. The largest category of imported goods from Jordan into the United States is apparel manufacturing products, which in 2020 composed 81.7% of imports. The US is also one of the largest exporters to Jordan. The United States exported $1.325 billion of products to Jordan; 26.1% of those exports were used or second hand merchandise. Other major exports to Jordan were transportation equipment, oil and gas, and food manufactures. US Department of Commerce

In the US, California is the largest exporter to Jordan. In 2020, California exported $277.6 million worth of products to Jordan. Used or second hand merchandise were the largest exported good, making up 33.6% of the and totaling approximately $93.2 million. Other key exports from California were food manufactures and agricultural products, which had a value of around $77.8 million and $60.8 million, respectively. US Department of Commerce

California imported around $107.3 million worth of goods from Jordan in 2020. The majority of those imports were apparel manufacturing products, which made up 53.6% of the total accounting for approximately $57.5 million. Other major imports from Jordan to California were miscellaneous manufactured goods and non-electrical machinery. US Department of Commerce.

The United States and Jordan have sustained a mutually beneficial trade relationship with the United States- Jordan Free Trade Agreement with its initial enactment in 2002 and full implementation by 2010. This agreement coincides with the Qualifying Industrial Zones established in 1996. Jordan, along with some other countries in the Middle East, are able to export products that were manufactured in their country into the US duty-free. The US-Jordan Free Trade Agreement has established intellectual property protection for both countries, reduced trade barriers for services, effective production protections for labor and the environment, and has made regulation more transparent across borders. Since the implementation, there has been major economic progression for the US and Jordan. For the US, the automobile exports to Jordan have risen by 1500%, corn exports have increased by 2300%, and TV and radio transmitters have increased by 500%.