Over the last decade, India’s developing economy has emerged to become an important player in the global market. With a workforce of 520.199 million in 2017—over three times the workforce of the U.S.—India has the human capacity to sustain large and rapid development. India’s population makes up 17.5% of the world’s population, and the country makes up 2.4% of the world’s surface area. 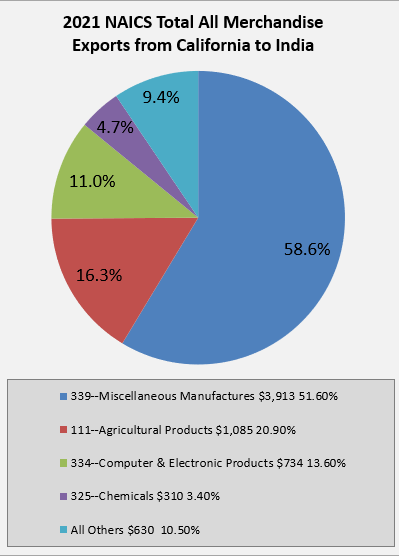 As of 2018, India is the world’s 5th largest economy and has a thriving middle class with an unemployment rate of 6.1%. As both a service-based and an agricultural economy, the country has seen strong growth in both sectors. The service industry has become an integral component of the Indian economy, making up 65% of the GDP while containing only 28% of the workforce. Agriculture, on the other hand, is the most popular sector, representing 53% of the workforce, but only 17% of the GDP. Policies of economic liberalization, first implemented in the early 1990’s, have created a trend of steady economic growth—averaging 7% since 1997.

The reduction of controls on foreign trade and investment has opened the country to new opportunities and markets, which have sustained this pattern of growth. In 2020, the United States exported $27.39 billion to India. There were four categories of goods that ranked the highest: oil and gas, chemicals, miscellaneous manufactured commodities, and computer and electronic products.

India is currently California’s 10th largest export destination. In 2020, California exports to India brought in over $4.9 billion, making up 18% of the U.S. total. California is a top exporting state to India, and the amount more than doubled from 2009 to 2020.

Miscellaneous manufactured goods made up 51.6 percent of California’s exports to India in 2020, which translated into $2.56 billion in exports. Other top export categories included agricultural products ($1.03 billion), computers and electronic products ($674 million), and chemicals ($170 million). U.S. Department of Commerce

Some 352,000 travelers visited California from India in 2018 and spent an estimated $788 million in the state (Visit California). California is also the leading destination state for Indian immigrants, home to 20% of the total nationwide. the largest Indian communities in California were found in the Bay Area (Bay Area Council).

According to the most recent figures in 2019, U.S. total stock foreign direct investment to India was $45.88 billion while Indian direct investment into the U.S. was $16.69 billion (Bureau of Economic Analysis). India FDI in the US supported 67,900 jobs and invested $193 million into research and development. Another $2.2 billion went to expanding US exports. The top industry sectors for Indian FDI in the US were: software and IT services, business services, pharmaceuticals, metals, industrial equipment, and communications. Select USA

Characteristics of travelers​ from India to California – 2012​ – Visit California

January 2018 – Energy Update from the U.S. Commercial Service
The Indian market with its one billion plus population, presents lucrative and diverse opportunities for U.S. exporters with the right products, services, and commitment. India’s requirements for equipment and services for major sectors such as energy, environmental, healthcare, high-tech, infrastructure, transportation, and defense will exceed tens of billions of dollars in the mid-term as the Indian economy further globalizes and expands. As per the revised estimates released by Central Statistical Organization (CSO), India’s GDP growth for FY 2016-17 was 7.1%. With expected continuance of the government’s liberal policies and with soon to be implemented Goods and Services Tax (GST), India has potential for a sustained high growth for the next couple of years and the U.S. companies must seize the opportunities to enter the rising Indian market.

For the administration of Indian Prime Minister Narendra Modi, the largest and most perplexing challenge is arguably addressing India’s significant need for power. India currently is home to 18 percent of the global population, but only accounted for 5.7 percent of the global energy demand in 2013. India runs at an average energy deficit of 5 percent with values as high as 25 percent in some regions, leading to daily rolling brownouts, hampering economic growth and limiting foreign investment in the country. The July 2012 blackout that affected 620 million people was, for example, seen as a global embarrassment and remains a politically contentious topic to this day. To learn more about India as a top U.S. smart grid export market, click here.

Framework for Cooperation on Trade and Investment

The promise that United States-India trade holds is manifested in the “Framework for Cooperation on Trade and Investment” that was signed by U.S. Trade Representative Ron Kirk and Indian Minister of Commerce and Industry Anand Sharma on March 17, 2010. This agreement strengthens bilateral cooperation and builds on recent rapid growth in U.S.-India trade, which has more than doubled over the last five years.

“There is almost limitless potential for growth in trade between our two countries, and that can contribute to economic recovery and job creation in the United States and continued economic growth in India,” said Ambassador Kirk.

“We can realize that potential by working together toward the goals set forth in the Framework agreement, such as developing and enforcing policies that encourage technological innovation, increasing agriculture, services, and industrial goods, and increasing investment flows. Closer collaboration with entrepreneurs and private sector leaders in both our countries will enhance our work.”

The United States and India agreed to work together to support greater involvement by small and medium-sized enterprises in each other’s markets, and to pursue initiatives in the further development of India’s infrastructure, and collaboration on clean energy and environmental services, information and communications technologies, and other key sectors.

Under this agreement, the U.S. and India intend to meet the objectives of developing and enforcing trade policies and fostering a trade-enhancing environment by undertaking initiatives to help us meet those goals. Examples include increasing opportunities for private sector partnerships in infrastructure projects; enhancing IPR awareness and enforcement; promoting increased bilateral cooperation in the healthcare, education, information technology, energy and environmental services industries; working to empower women and disadvantaged groups; creating greater mutual understanding of respective approaches to government procurement; and SME development.

The California Chamber of Commerce, in keeping with long-standing policy, enthusiastically supports free trade worldwide, expansion of international trade and investment, fair and equitable market access for California products abroad and elimination of disincentives that impede the international competitiveness of California business. New multilateral, sectorial and regional trade agreements ensure that the United States may continue to gain access to world markets, resulting in an improved economy and additional employment of Americans.

What You Need to Know Before Exporting to India

In 2018, many industries are developing in India. The U.S. Commercial Service specifically notes the following where there is market entry opportunities and growth potential:

(June 12, 2008) On average, 20th century Westerners — whether from Great Britain, Belgium, the Netherlands, the United States, Canada or Australia — had three times the material wealth and standard of living of their forebears the century before.

“The world is on the cusp of another explosive economic growth phase, this time in emerging markets such as India, Brazil and China,” says Sanjiv Sanghvi, chief executive officer of Wells Fargo HSBC Trade Bank. Full Article