The World Bank classifies Honduras as a lower middle income country in Central America and geographically, Honduras is slightly larger than Tennessee. Honduras has a population of 9.74 million people and a gross domestic product (GDP) of $25.09 billion. Honduras’ economy relies heavily on the trade relationship it retains with the United States. Historically, Honduras’ economy has been dependent on the export markets of agricultural goods, such as bananas and coffee. However, as development furthers, the economy has expanded to an export market based on a majority of apparel and automotive products. World Bank, CIA 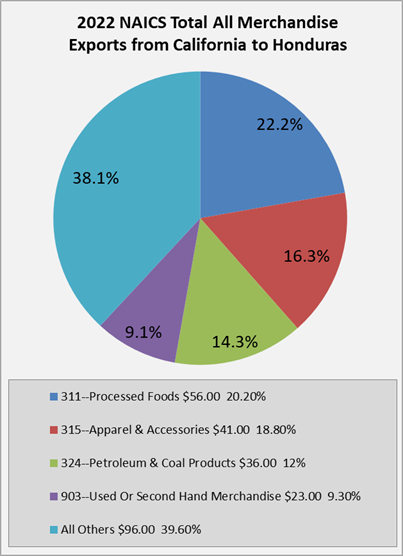 The United States is not only the number one export destination of Honduras’ goods, but is also the top importer of products into the country. In 2020, the United States exported over $4.2 billion of goods into Honduras; over 20% was textiles and fabrics. Other exports into Honduras included coal and petroleum products, food manufactures, and agricultural products. The same year, the US imported $3.8 billion worth of goods from Honduras. A majority of those goods were apparel manufacturing products totaling over $1.9 billion dollars and composing 50% of all Honduras’ imports into the US. Honduras also provides key imports of agricultural products and transportation equipment. US Department of Commerce

In 2019, U.S. FDI into Honduras totaled $1.2 billion, while Honduran FDI into the US totaled $2 million. (Bureau of Economic Analysis).

In the United States, California is the ninth largest exporter of goods to Honduras. In 2020 California exported approximately $116 million worth of goods to Honduras. The main exports were food manufactures, products in apparel manufacturing, agricultural products, and electrical equipment. On the other hand, California imported $159.7 million worth of goods from Honduras in 2020, making it the sixth largest importer out of all the states of Honduran goods. 52% of imports from Honduras into California were apparel manufactured goods at a value of $83.6 million. The other key imports were agricultural products, food manufactures, and transportation equipment. US Department of Commerce

The World Trade Organization’s conducted a review on the practices and policies in regards to trade of Honduras based on reports from the Government of Honduras and the WTO Secretariat. (05/04/2016)

The United States trade deal with some of the small developing countries in Central America was signed by President George W. Bush in 2005 as an expansion of North American Free Trade Agreement for the US. Members of this free trade agreement include the United States, Costa Rica, El Salvador, Guatemala, Honduras, Nicaragua, and the Dominican Republic. This trade agreement has led for this group to become the US’s 16th largest trading partner in commodities. Exports from the United States to this group of countries totaled $29 billion in 2015, while imports totaled approximately $24 billion. This trade agreement ensures that 100% of goods from the United States are not subject to tariffs in these countries, it also has a goal of phasing out all tariffs on agricultural products by 2020.