Fiji is an island country in the Pacific made up of 332 islands, 106 of which are inhabited. As one of the most developed Pacific island economies, Fiji has abundant forest, fish, and mineral resources and has a prosperous tourist industry. Fiji has been a member of the WTO since 1996 and a member of Gatt since 1993. Fiji has a population of approximately 883,483. In 2018, Fiji’s GDP was more than $5.5 billion. CIA Factbook, World Bank 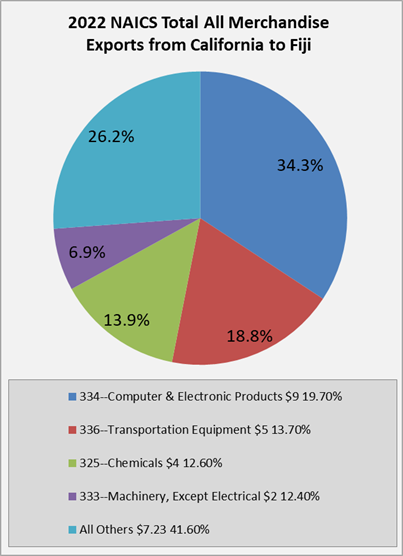 In 2019, California was the second largest state exporter to Fiji with approximately $18 million, making up over 17% of US exports. Exports from California to Fiji have nearly doubled from 2009 to 2018. Transportation equipment held 30.1 percent with $5.45 million. Used and secondhand merchandise held 12.3 percent with $2.23 million, followed by computer and electronic products with 10.7 percent and food manufactures with 7.2 percent. U.S. Department of Commerce