Estonia is a country in Northern Europe with a population of 1.3 million, which makes it one of the least-populous member states of the European Union. Estonia is a developed country with an advanced high-income economy that has been among the fastest growing in the EU. Estonia has been involved in an active trilateral Baltic states cooperation with Latvia and Lithuania, as well as a Nordic-Baltic cooperation with the Nordic countries, and is a member of the Nordic-Baltic Eight. 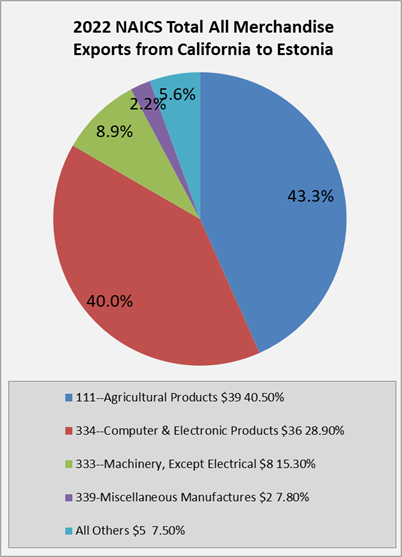 The U.S. exported $345 million to Estonia in 2020. $87 million and 25.4% of which was made up of computer and electronic products. This was followed by $43.6 million of non-electrical machinery, $41.5 million of miscellaneous manufactured commodities, and $36.2 million of transportation equipment. The U.S. imported $1.07 billion worth of products from Estonia in 2020. 65.1% of imports were computer and electronic products, followed by non-electrical machinery at 5.8%. electrical equipment, appliances and components at 5.5% and wood products at 5.2%. (U.S. Department of Commerce)

California exports to Estonia totaled $78.2 million in 2020. Agricultural products made up almost 40.5% of the total, followed by computer and electronic products at 28.9%. Petroleum and coal products and non-electrical machinery accounted for over $11.9 million and $6.08 million of exports, respectively as well. California imported $35.8 million of products from Estonia in 2020. Computer and electronic products made up over 25.6% of the total, followed by food manufactures and non-electrical machinery, each at about 16%. (U.S. Department of Commerce)