El Salvador is a small developing country in Central America approximately equivalent in size to New Jersey. El Salvador, with a population of 6.45 million people and a gross domestic product (GDP) of $27 billion, is classified by the World Bank as a lower middle income country. Though it is a smaller country, El Salvador has a vast array of production. While the majority of the land in El Salvador is used for agricultural production (about 75%), its exports vary from offshore assembly exports, to coffee, sugar, and textiles. World Bank 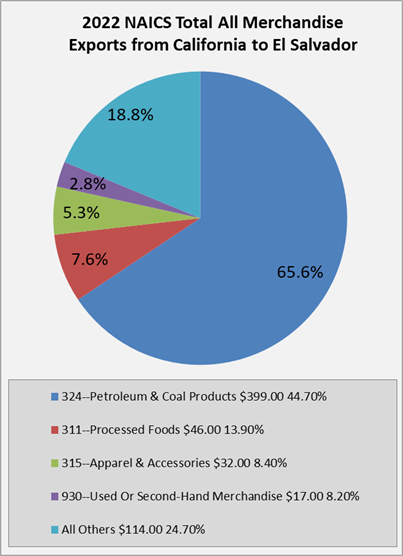 California is the third largest US state exporter of goods to El Salvador. California exported $392 million of products to El Salvador in 2020. Petroleum and coal products are the main exported good from California, making up 44.7% of the total. Other key exports are used or secondhand merchandise, food manufactures, and computer and electronic products. California is also one of the largest importers of El Salvadorian products out of all the states with a total of $136 million worth of imported goods in 2020. The main imported goods included apparel manufacturing products, which represented 38% of all the imports, followed by food manufactures, textile products, and agricultural products.

In 2019, out of the $113.2 billion the US invested into Central America, $3.3 billion went into El Salvador. In 2019, El Salvador’s FDI into the US based on balance of payments and direct investment position was undisclosed.  US Department of Commerce, BEA

The United States trade deal with some of the small developing countries in Central America was signed by President George W. Bush in 2005 as an expansion of the North American Free Trade Agreement. Members of the CAFTA-DR free trade agreement include the United States, Costa Rica, El Salvador, Guatemala, Honduras, Nicaragua, and the Dominican Republic.  Exports from the United States to this group of countries totaled $29 billion in 2015, while imports totaled approximately $24 billion. This trade agreement ensures that 100% of goods from the United States are not subject to tariffs in these countries, it also has a goal of phasing out all tariffs on agricultural products by 2020.