Cote d’Ivoire, or the Ivory Coast in English, is located off the south coast of West Africa. The area became a protectorate of France in 1842, becoming a colony in 1893, and later achieved independence in 1960 under Félix Houphouët-Boigny, who ruled the country from 1960 to 1993 when he died. The Ivory Coast is relatively stable, by regional standards, and has close political and economic ties with its West African neighbors, while at the same time maintaining close relations with the West, especially France. In the 1960s and 70s, the country was an economic powerhouse in West Africa due to its production of coffee and cocoa. Today, the country is the world’s largest exporter of cocoa beans and the fourth largest exporter of goods overall in sub-Saharan Africa. 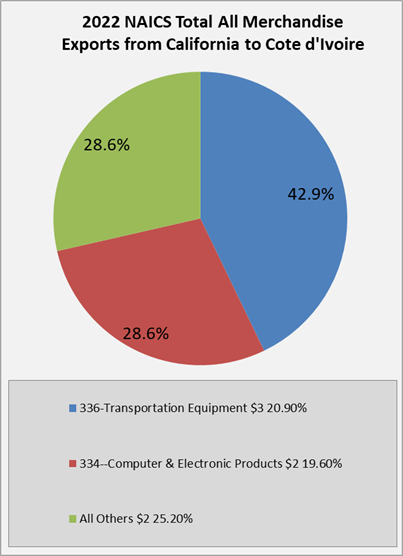 In 2020, the U.S. exported $208.06 million worth of goods to the Ivory Coast. Chemicals made up 42.1% of the total and $87.7 million. This was followed by food manufactures and non-electrical machinery which totaled $22.39 million and $16.03 million, respectively. Transportation equipment also made up 7.3% of the total. The same year, the U.S. imported $881 million worth of goods form the Ivory Coast. 59.3% of total imports was made up of agricultural products, which includes cocoa, and totaled $522 million. This was followed by imports of $268 million of food manufactures, making up 30.4% of the total, and forestry products and chemicals making up 9.2 and 0.4% of the total, respectively.

California exported $4.07 million to the Ivory Coast in 2020. This was made up of $954 thousand of non-electrical machinery, which accounted for 23.4% of the total and $897 thousand of chemicals, which accounted for 22% of the total. This was followed by miscellaneous manufactured commodities and computer and electronic products which each made up just over 19.6% and 17.5% of total exports, respectively.