(April 4, 2017) The Standing Committee on International Trade of the Canadian House of Commons visited the California Chamber of Commerce on Tuesday, April 4, 2017 to reaffirm the importance of the long-standing and important California-Canada trade and investment relationship. The 12-member delegation representing different provinces and political parties met with Susanne Stirling, CalChamber vice president for international affairs.

Geographically, Canada is the second largest country in the world, with a population of 35.85 million and a gross domestic product (GDP) of $1.55 trillion (World Bank). The United States and Canada enjoy the largest bilateral trade and investment relationship in the world. In 2016, two–way trade in goods between Canada and the United States topped $544 billion, down from $575.2 billion in 2015. Exports to Canada were $265.9 billion, making it the largest export destination for the U.S. According to the most recent figures, U.S. companies invested approximately $353 billion into Canada and foreign direct investment from Canada into the U.S. was nearly $269 billion.

(March 8, 2017) While there are areas that can be improved, the North American Free Trade Agreement (NAFTA) serves the employment, trading and environmental interests of California, the United States, Canada and Mexico, and is beneficial to the business community and society as a whole, panelists concluded at a discussion co-hosted by the California Chamber of Commerce.

The objectives of the CalChamber-supported agreement are to eliminate barriers to trade, promote conditions of fair competition, increase investment opportunities, provide adequate protection of intellectual property rights, establish effective procedures for implementing and applying the agreements and resolving disputes, and to further trilateral, regional and multilateral cooperation.

(September 5, 2014) A fact-filled look at the many connections between Canada, the United States and California was the focus of a recent breakfast gathering hosted by the California Chamber of Commerce Council for International Trade.

Consul General Cassie Doyle, Canada’s senior representative for Northern California, Nevada, Hawaii and Guam, emphasized that bilateral trade between Canada and the United States is the largest in the world, with more than $2 billion in goods and services crossing the border each day for a total of $735 billion in 2013.

International Roundtable Offers Update on Canada Beyond the Border Action Plan
(August 1, 2013) Caron Wilson, policy adviser with Canada’s Privy Council Office, shared details on the Beyond the Border Action Plan between the United States and Canada during an International Roundtable at the California Chamber of Commerce yesterday.

On December 7, 2011, after consulting with stakeholders, chambers of commerce, industry and interest groups, President Obama and Prime Minster Harper released the Beyond the Border Action Plan , which seeks to deepen the Canadian partnership with the United States and enhance mutual security, prosperity and economic competitiveness while respecting each country’s sovereignty and privacy regimes. 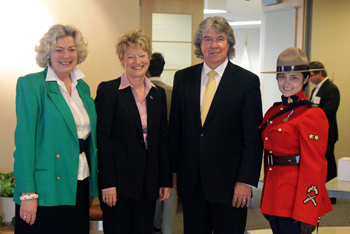 (March 13, 2013) The California Chamber of Commerce hosted Consulates General of Canada, Consul General Cassie Doyle of San Francisco and Consul General David Fransen of Los Angeles, on March 13, for the 7th annual celebration of Canada Day at the State Capitol. 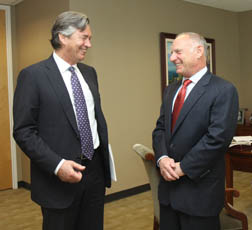 (March 12, 2012) Allan Zaremberg, CalChamber president and CEO, reiterates support to Canadian Ambassador Gary Doer for Canada’s interest in joining the Trans Pacific Partnership negotiations. Ambassador Doer was in Sacramento Monday, March 12 for “Canada Day.” He stopped by the CalChamber offices to speak with Zaremberg about the Trans Pacific Partnership, energy issues and the California-Canada trade relationship. 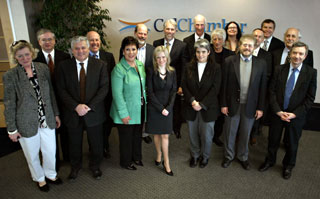 (March 13, 2009) The California Chamber of Commerce recently hosted a meeting of the Canada-California Strategic Innovation Partnership (CCSIP), a catalyst for collaborative research, development and delivery between two innovation-intensive jurisdictions: California, one of the most dynamic innovation engines on earth; and Canada, a leading country in university research intensity.

(December 13, 2007) The Honorable Michael Wilson, Canadian ambassador to the United States, highlights the prosperity California has gained through international trade with Canada at a December 13 International Luncheon Forum at the California Chamber of Commerce. Seated are Susan Corrales-Diaz, chair of the CalChamber Council for International Trade, and Marc LePage, consul general of Canada. 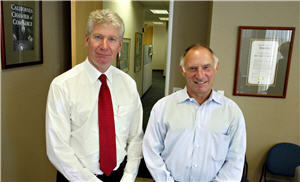 (September 18, 2009) Trade, health care, water and energy issues were among the topics of discussion when the CalChamber hosted a meeting with the new consul general of Canada. Pictured: Stewart Beck (left), Consul General of Canada, Allan Zaremberg (right), CalChamber President and CEO