In Geneva in March 2022, the U.S., the EU and more than a dozen other World Trade Organization members issued a joint statement condemning Belarus’ support for Russia’s war in Ukraine and affirmed their intent to block its bid to join the WTO. “We have concluded that Belarus is unfit for WTO membership. We will not further consider its application for accession,” the members said.

The Republic of Belarus is a landlocked country in Eastern Europe bordered by Russia to the Northeast, Ukraine to the South, Poland to the West, and Lithuania and Latvia to the Northwest. The population of Belarus is almost 9.37 million. Over 40% of the country is forested. Belarus’ major economic sectors are service industries and manufacturing. Belarus declared independence in 1991, following the dissolution of the Soviet Union. Belarus is a member of the United Nations and the Eurasian Economic Union. The country is not apart of the EU, however it does maintain a bilateral relationship with the organization.

Diplomatic relations between the U.S. and Belarus were established just over 25 years ago. The U.S. has provided nearly $250 million of assistance to Belarus since 1991 to support the development of a more democratic society and a more prosperous economy. Over the years, thousands of Belarusians have come to the United States on academic and professional exchange programs.

The U.S. exported $218 million worth of goods to Belarus in 2021. Top exports were transportation equipment ($121 million), machinery, except electrical ($37 million), computer and electronic products  ($15 million), and chemicals ($13 million). Imports from Belarus to the U.S. totaled $479 million in 2021. This was mostly made up of chemicals, wood products, primary metal manufactures, and computer and electronic products. 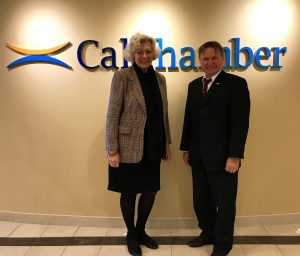 On February 15, 2018 Susanne Stirling, Vice President of International AFfairs at the CalChamber, met with Dr. Florin Ciuriuc a Sacramento Slavic-American Community Leader. Dr. Ciuriuc is the Executive Director of the Slavic Community Center in Sacramento and a Human Rights Advocate. Dr. Ciuriuc is set to become the Honorary Consul of Belarus in Sacramento.

He can be contacted at slaviccommunitycenter@yahoo.com.