The Kingdom of Bahrain is in the Middle East, just east of Saudi Arabia. Bahrain encompasses a group of islands in the Persian Gulf three times the size of Washington D.C. The World Bank classifies Bahrain as a high income country with a gross domestic product (GDP) of $38.57 billion and a population of 1.64 million people in 2019. World Bank

The United States and Bahrain have an established trade relationship, partly due the bilateral free trade agreement that was enacted in 2006. In addition to having a founded trade relationship, there is bilateral foreign direct investment (FDI) across their borders. In 2019, out of the $75.2 billion of direct investment the United States had in the Middle East, $510 million was invested into Bahrain. In 2019, Bahrain invested $556 million into the United States (BEA). This FDI in the U.S. from Bahrain supports 13,500 U.S. Jobs. $10 million went towards investing in innovative research and development. The top industry sectors in the US that FDI from Bahrain goes into are communications, software and IT services, and metals. SelectUSA 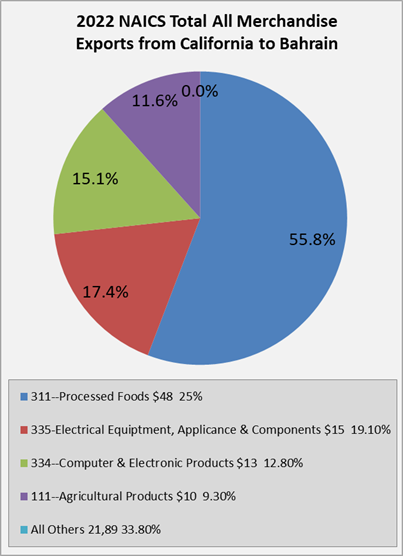 Bahrain’s export markets have been based in primary metal manufactures, petroleum, and textiles. The United States is one of their top trading partners. In 2020, the US imported $637.5 million worth of goods from Bahrain. Out of the goods imported, 58.5% was classified as primary metals and totaled $372.6 million. Other major imports from Bahrain were petroleum and coal, textile mill products, and plastic and rubber products. The US exported $885 million worth of products to Bahrain in 2020, down from $1.4 billion in 2019, which was a result of a decrease in exported transportation equipment. Key United States exports to Bahrain were transportation equipment and special classification products which composed 24.7% and 21.8%, respectively, of total exports to Bahrain. Other main exported goods to Bahrain were non-electrical machinery and computer and electronic products. US Department of Commerce

California is one of the top exporting states to Bahrain in the US. California exported $85.6 million in goods to Bahrain in 2020. The top exported commodity was non-elecitrcal machinery, which totaled 34.5% of total exports to Bahrain from California, and had a worth of $29.5 million. Other major exported goods were agricultural products, computer and electronic products, and food manufactures. California imported $4.89 million worth of goods from Bahrain in 2020, down from $8.5 million in 2019. 40.3% of those imports were primary metal manufactures with a value of $1.97 million. The second key import was reimports totaling $1.75 million. US Department of Commerce

After the uprising events in 2011, the Bahrain Independent Commission of Inquiry (BICI) was established on June 29th, 2011. Their goal was to investigate the events and the outcomes. The holistic report that was accepted locally and internationally received significant cooperation from the government. The report was released in November of 2011 and recommended actions to be taken by the government to improve stability and protection of human rights. Recently, Bahrain has celebrated their full implementation of the recommendations made from the BICI report and looks forward to continuing reform. Bahrain Independent Commission of Inquiry

The United States entered into a free trade agreement with Bahrain in January of 2006. Goals of the agreement included the expansion of the US’ export opportunities in the Middle East and the creation of more jobs for US workers. It promotes Bahrain’s economic and political reforms. It has resulted in a strong bilateral trade relationship with the United States and Bahrain. The day the agreement became official and opened, 100% of all industrial and consumer products moved across their borders tariff free. United States agricultural exports increased with an elimination of 81% of tariffs and Bahrain opened their service sector leading to an expansion of market opportunity for companies in the United States. The free trade agreement not only was successful with the agricultural and service sectors, but also was beneficial to industries such as pharmaceuticals, machinery, and aircraft. USTR