With Buenos Aires as its capital and over 44.9 million citizens, Argentina is the second largest country in South America. It is the eighth largest country in the world and is roughly the size of the U.S. east of the Mississippi River. In 2019, Argentina’s GDP dropped drastically for the second year to $445 billion from $519.8 billion in 2018. U.S. Department of State, World Bank 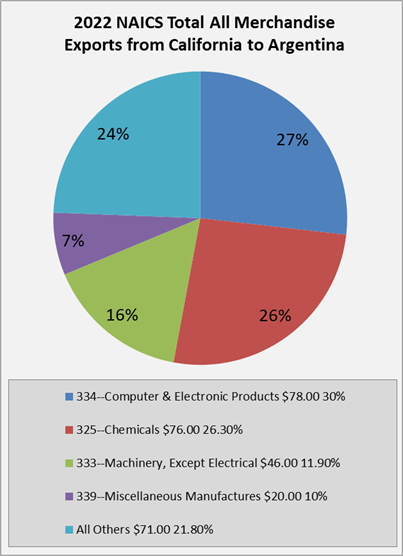 Argentine FDI into the U.S. totaled $5.4 billion in 2019, while US FDI into Argentina totaled $10.698 billion the same year. Argentina supported about 1,600 jobs in the U.S in 2018. In 2018, South and Central American FDI contributed $100 million to research and development and contributed a value of $13.4 billion to expanding U.S. exports. The top five industry sectors of FDI into the US were: software and IT services, business services, real estate, communications, transportation, and food and beverages. SelectUSA

Argentina, Once Shunned, Regains Its Allure Wall Street Journal May 27, 2015

On August 21, 2012 the U.S. Trade Representative Ron Kirk formally requested consultations with the Government of Argentina under the dispute settlement provisions of the World Trade Organization (WTO)

US companies value the trading relationship with Argentina and are desirous of creating jobs and growth. Current Argentine government trade policy does create an obstacle, however, pending WTO consultations should promote dialogue to improve the relationship. See a summary of the dispute settlement here

Obama Declares a New Partnership After Talks With Argentine Leader

President Obama on March 23, 2016 declared a fresh era of partnership between the United States and Argentina, saying he stood ready to support Mauricio Macri, the country’s new president, in his bid to improve the nation’s economy and credibility on the world stage.

Santa Fe Province and the State of California

California and Santa Fe have an ongoing reciprocal exchange program, which began in 2004 between the California Senate International Relations Foundation and the Fundación Nueva Generación Argentina (FNGA). The goal is to increase political and economic ties, as well as discuss specific public policy issues including sustainable energy, port security and goods movement, and public safety.

Santa Fe is located inland northeast of Buenos Aires. The main river and connection to the Atlantic Ocean is the Parana River—one of the largest in the world. Manufacturing is also important in Santa Fe, with mills, refineries and steel production.The main city and capital of Santa Fe is Rosario, with a population of more than3 million.

In addition to Santa Fe’s lieutenant governor and key senators, the delegation was very interested in establishing private sector contacts. The Nueva Generacion Argentina Foundation, founded in 1990 in Rosario, has been researching and fighting for strengthening and consolidating democracy and the institutions of the republic, spreading the culture of democracy as a value and principle to improve the population’s welfare and quality of life. The FNGA is a nonprofit, independent and nonpartisan organization.

The Foundation has a strong international vision and is working to form a special relationship with Californians interested in exchanges in the academic, commercial, cultural and sporting areas. In particular, there is interest in strengthening commercial exchanges.

The Rosario Stock Exchange was also represented on the mission. The Exchange is a civil, nonprofit organization founded in 1884 with the aim of promoting legitimate transactions, such as trading of grains, oil seeds and other agricultural products and byproducts, as well as, bonds, stock, certificates and other marketable securities, services and goods. Visit: www.bcr.com.ar