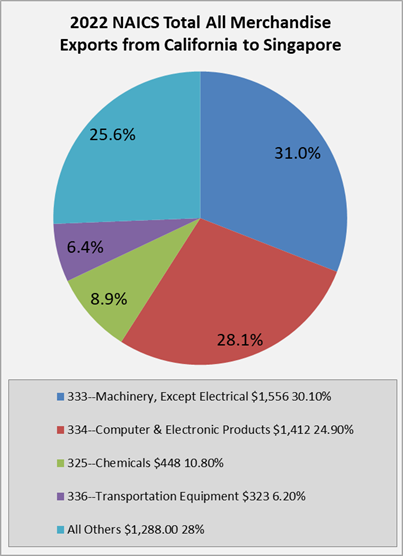 U.S. exports to Singapore totaled $27.08 billion dollars, and imports to the United States and from Singapore totaled $30.8 billion in 2020. Top exports to Singapore included computer and electronic products, making up 21.4% of the total, followed by transportation equipment, chemicals, and non-electrical machinery. Top imports from Singapore include chemicals, which made up 23.6% of the total, followed by primary metals, computer and electronic products, and food manufactures.

Since implementation of the U.S.-Singapore FTA in 2004, U.S. exports to the nation have increased by over $8 billion. According to the Office of the U.S. Trade Representative, new market opportunities have also been created, including those for pharmaceutical products and organic chemicals.

Singapore is the 13th largest export market for California. In 2020, California exports to Singapore totaled over $3.89 billion. Computers and electronic products accounted for 30.1 percent of the total exports, while non-electrical machinery was second with 24.9 percent. Imports to California from Singapore totaled $4.3 billion in 2020. Top imports included petroleum and coal products, computer and electronic products, chemicals, and miscellaneous manufactured commodities.

U.S. direct investment to Singapore totaled $287.95 billion in 2019. Foreign direct investment from Singapore into the United States was $60.1 billion (BEA). In 2018, Singaporean FDI in the US contributed to 39,300 jobs, $475 million in research and development, and another $1.4 billion of expanded US exports. The top industry sectors for Singaporean FDI were: software and IT services, communications, business services, financial services, rubber, and food and beverages.  Select USA According to figures from the 2018 SelectUSA Investment Summit in Washington D.C., Singapore is currently the sixth fastest-growing source of FDI in the US . Major investors include Singapore Airlines, American President Lines, and Sovereign Wealth Fund (known in San Francisco as Singapore Investment Wealth Corp).

In March 1998, the California Trade and Commerce Agency signed a Memorandum of Understanding with the Singapore Trade Development Board, Economic Development Board, and the National Science and Technology Board. This agreement was reinforced in May 1999, when then Governor Gray Davis and Prime Minister Goh signed a Memorandum of Understanding reiterating the mutual commitment to economic and IT co-operation. (Singapore MFA)

Singapore was one of California’s overseas markets with approximately 70,000 visitors to California in 2010.  California Tourism Industry

The U.S.- Singapore Free Trade Agreement  (USSFTA) went into effect in January 2004. Under the agreement, most tariffs were eliminated immediately, with the remaining tariffs phased out over a three to ten-year period.

The Agreement was signed on May 6, 2003 by President Bush and Goh Chok Tong, the Prime Minister of Singapore. The U.S. House of Representatives and Senate passed the FTA in July 2003 by a vote of 277-155 and 66-32 respectively. This marked the first time the Trade Promotion Authority (approved in 2002) was used.

A major strategic trading partner of the United States and one of America’s closest friends, Singapore has one of the most open, well-regulated, safe and secure investment climates in the world. It is consistently rated among the most competitive economies in the world. The USSFTA is making this remarkably productive relationship even closer. In 2014, the U.S. State Department estimated that nearly 2,000 U.S. companies have regional headquarters in Singapore. Additionally, a large number of Americans currently live in Singapore.

The U.S.-Singapore FTA enhances mutual interests in a stable, prosperous ASEAN and East Asia, and will further strengthen the partnerships across the Pacific. Singapore, one of the busiest port cities in the world, already has free trade pacts with New Zealand and Japan.

American companies have a great deal to gain with the USSFTA. This comprehensive agreement benefits American firms and workers, and complements ongoing regional and multilateral trade and investment liberalization efforts.

The two sides reviewed implementation of the agreement and the growth in bilateral economic trade and investment.  Since the FTA came into force in 2004, job creating U.S. goods exports have increased 34 percent, with goods exports totaling $22.2 billion in 2009.  Trade in services also is up, with U.S. exports of $9 billion to Singapore in 2008 (the latest available data), up 60 percent from 2004.  Foreign direct investment in both directions rose, with Singaporean investment in the United States totaling $22.9 billion last year and U.S. investment in Singapore totaling $76.9 billion.

During the review meeting the two sides exchanged views on issues and concerns related to agricultural and textile market access, intellectual property rights, regulations related to cable TV content, and other issues.  The two sides also reviewed the past year’s activities under the Plan of Action for Environmental Cooperation, and reviewed the results of recent meetings in Singapore exploring ways to intensify joint work on labor issues, including worker rights and human resources development.

The U.S.-Singapore FTA also serves as a foundation for broader cooperation between the two countries regionally and multilaterally.  The United States is engaging closely with Singapore on the Trans-Pacific Strategic Economic Partnership (TPP), a high-standard agreement that will serve as a platform for Asia-Pacific economic integration in a way that reflects U.S. priorities and values.  The United States and Singapore also work together closely in other fora, including the WTO, ASEAN and APEC.

California Chamber of Commerce International luncheon held on October 6, 2015 with the Consulate General of Singapore celebrated Singapore’s 50th National Day of Independence, providing an opportunity to highlight the strong trading ties between Singapore and the United States, as well as California. Top Story