As the most populous country in Central America, Guatemala has a population of 16.85 million people and it is roughly the size of Tennessee. Guatemala is part of the Central America Common Market and has a GDP of $77.6 billion. According to the CIA Factbook, their GDP per capita is roughly one-half that of the average for Latin America and the Caribbean. World Bank 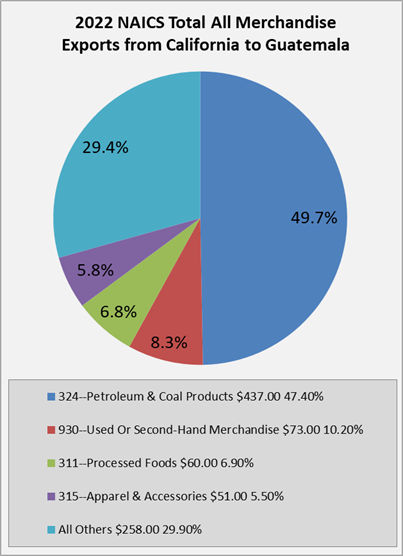 As California’s 28th largest export partner, up from 35th in 2020, Guatemala imported over $731 million worth of California goods in 2021. Petroleum and coal products accounted for $340 million and used and second-hand merchandise accounted for $53 million, while used textiles and fabrics and processed foods were other top categories. California imports approximately $721 million from Guatemala, including apparel, agricultural products and processed foods. (U.S. Department of Commerce)

President Bush signed the US-DR/CAFTA on August 2, 2005, giving final U.S. approval of the agreement. This follows a vote in the U.S. House of Representatives on July 28 and the U.S. Senate on June 30, 2005. The governments of El Salvador, Guatemala, Nicaragua, Honduras and the Dominican Republic have implemented the agreement as of March 2007. Costa Rica ratified CAFTA completely in 2008.

California exports to the DR-CAFTA market totaled over $1.8 billion in 2015, making it the 4th largest state exporter.

The CAFTA was signed on May 28, 2004 in Washington, D.C. U.S. Trade Representative Robert Zoellick signed on behalf of the United States. Trade ministers from Costa Rica, El Salvador, Guatemala, Honduras and Nicaragua signed on behalf of their countries. On August 5, 2004, representatives from the United States and the Dominican Republic signed an agreement formally including the Dominican Republic in the agreement.