Ethiopia has a population of approximately 112 million and is the second most populous country in Africa and the most populous landlocked country in the world. In 2019, Ethiopia’s GDP was $95.9 billion. 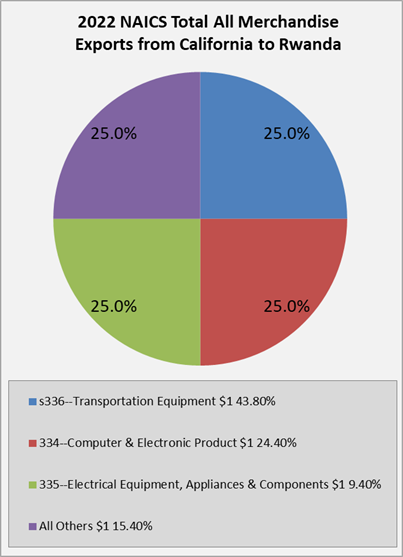 Two-way trade between the United States and Ethiopia was approximately $1.43 billion in 2020. The United States exported over $907 million to Ethiopia, making it the 76th largest export destination for the US. Exports consisted of $636.57 million in transportation equipment, $102.5 million in agricultural products, and $38.6 million in food manufactures. Imports from Ethiopia were $525.2 million, with the top categories being apparel manufacturing products, agricultural products, reimports, and leather and allied products.

In 2020, California was one of the top ten state exporters to Ethiopia with approximately $25.7 million.  Transportation equipment and computer and electronic products were credited with over half the total, making up 38.7% and 21.5%, respectively. Fabricated metals and chemicals each held 7.3% percent of the total. California imported $74.46 million from Ethiopia in 2020, agricultural products made up 70% of the total. (US Department of Commerce)