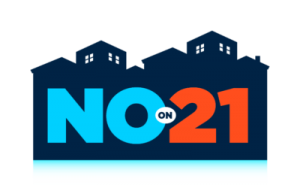 Proposition 21 would replace the Costa-Hawkins Rental Housing Act, which was passed in 1995. Costa-Hawkins prohibits local governments from using rent control on (a) housing that was first occupied after February 1, 1995, and (b) housing units with distinct titles, such as condos, townhouses, and single-family homes.

This initiative statute instead would allow local governments to adopt rent control on any housing units, with exceptions for (a) housing that was first occupied within the last 15 years and (b) units owned by natural persons who own no more than two single-family dwellings.

The 2016 Legislative Analyst’s Office (LAO) report on California’s housing concluded that “[r]ent control will do nothing to increase our supply of affordable housing and, in fact, likely would discourage new construction.” The LAO goes on to state that any “attempt to make housing more affordable without increasing the overall supply of housing . . . does very little to address the underlying cause of California’s high housing costs: a housing shortage.”

Additionally, under Costa-Hawkins, landlords can increase rent prices to market rates when a tenant moves out (a policy known as vacancy decontrol). This ballot measure would eliminate vacancy decontrol and instead require local governments to only allow landlords to increase rental rates by no more than 15% during the first three years following a vacancy.

The ballot measure is unnecessary in the wake of AB 1482, which was signed by Governor Gavin Newsom last October to cap annual rent increases at 5% plus inflation for tenants. AB 1482 requires that a landlord have a just cause, as defined in the law, to evict tenants that had occupied the rental for at least one year. AB 1482 included exemptions for housing built in the last 15 years and some single-family homes and duplexes. The legislation was designed to sunset after 10 years.