The United States has substantial economic ties with Hong Kong. A report done by the U.S. State Department in February 2015 indicates that there are some 1,400 U.S. firms  and approximately 85,000 U.S. residents in Hong Kong. Another 1.2 million people visited Hong Kong last year from the U.S. The latest available figures on U.S. direct investment in Hong Kong show investment at about $64 billion, making the United States one of Hong Kong’s largest investors.

In 2018, total FDI stock in the US from Hong Kong totaled $16.88 billion and FDI in Hong Kong from the US totaled $82.54 billion. Hong Kong FDI in the US supported 25,500 jobs and invested $632 million in research and development and another $737 million in expanding US exports. The top industry sectors for Hong Kong FDI in the US were: consumer products, food and beverages, industrial equipment, textiles, software and IT services, and business services. Select USA

Characteristics of travelers from Hong Kong to California – 2013
Visit California

World Competitiveness Yearbook 2013 names Hong Kong as the third most competitive economy, after the USA and Switzerland. The Yearbook, ranks the ability of economies across the world to create and maintain an environment that sustains the competitiveness of enterprises therein. The report selected 59 economies for ranking.

On Tuesday, February 4, 2020 the CalChamber hosted the Hong Kong Economic and Trade Office Commissioner Eddie Mak for a meeting in Sacramento.

Trade, investment and innovation were topics of discussion on March 14 when representatives of the Hong Kong Economic and Trade Office stopped by the California Chamber of Commerce. 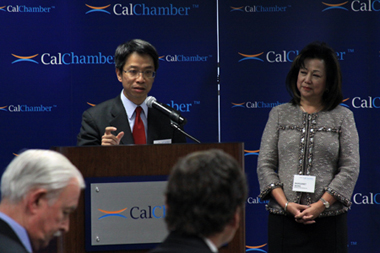 (From left to right) The Honorable Clement C.M. Leung, Hong Kong commissioner to the U.S.; and Mrs. Margaret Wong, president and CEO of McWong International, and member of the CalChamber Board.

Leung introduced Hong Kong as a “place where the East meets the West,” a launching pad both for U.S. businesses looking to enter the Asia market and for Chinese enterprises, which are venturing out onto the global stage.

Tong spoke at a Sacramento international luncheon forum hosted by the California Chamber of Commerce and the Hong Kong Economic and Trade Office in San Francisco. He discussed how Hong Kong, a special administrative region of the People’s Republic of China, has managed to preserve its commitment to free market principles and competitive spirit while dealing with the slow economy.

“Removal of wine duties certainly helps encourage more locals and tourists to drink in Hong Kong, but this measure was introduced with a much bigger objective in mind: The development of Hong Kong into a hub for wine-related business,” Tong said.