Raises Concerns of Negative Unintended Consequences for Workers and Employers

Union membership has remained relatively low in recent years. Only about 16.2% of workers are unionized in California and just over 10% are unionized nationally. Groups differ as to why. Some say it is due to slower growth in traditionally heavily unionized industries like manufacturing, some say it is due to corporate opposition to labor organizers, some say it is due to the increase of temporary and contract work, and some say unions are declining in relevance and are spending more time and money on lobbying compared to organizing campaigns. To address this membership decline, some labor advocates are calling for the implementation of sectoral bargaining. 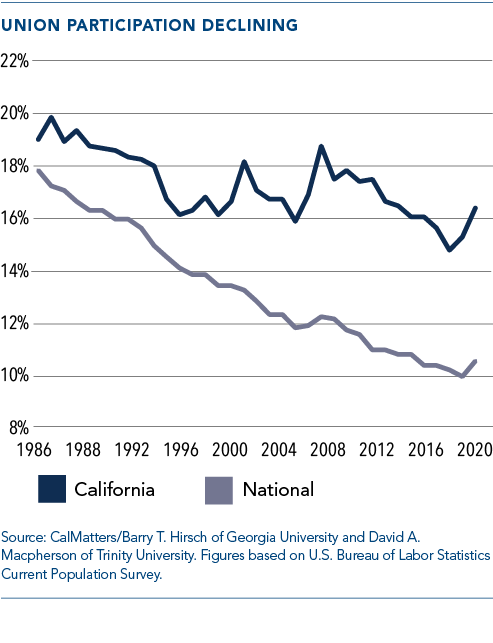 What Is Sectoral Bargaining?

Currently, most bargaining in the United States and California is “enterprise-based bargaining,” in which unions negotiate with individual employers. “Sectoral bargaining” has historically been more common in European countries. It occurs when an association representing an industry negotiates with a union that may represent workers in that industry. The resulting agreement is then imposed by a government agency on all firms in the industry in that jurisdiction, regardless of whether those firms’ employees are represented by that union or any other union.

Supporters of sectoral bargaining say it is an answer to declining union membership, and the benefits they say a union provides to workers. They support applying collective bargaining agreements to similar workers within the same industry, regardless of whether those workers belong to a union. Even proponents of sectoral bargaining, however, acknowledge that effects of sectoral bargaining are limited. An industry-wide agreement may be useful to set wages, but it cannot be used to address workplace-specific issues. Proponents therefore envision a sort of hybrid system where one version of union contracts applies to workers in nonunionized workplaces, but workplace-specific contracts also exist only for unionized firms.

Sectoral bargaining raises concerns for both workers and employers.

• First, it imposes a union onto employees who may not have ever voted on union representation — or even voted against union representation in the first place. Proponents of sectoral bargaining also advocate strengthening unions’ abilities to collect dues, so it is likely such sectoral agreements would involve collecting dues from all employees, regardless of whether the employee’s worksite is organized. Indeed, proponents have argued that while sectoral bargaining leads to higher levels of union density, it also engenders the “free-rider problem” because not all workers subject to the negotiated contracts are dues-paying union members. (See Center for American Progress Action, “How to Promote Sectoral Bargaining in the United States,” (July 10, 2019).)

• Second, under sectoral bargaining, every employer must adhere to the same salary, benefits and work rule requirements, no matter how the market and economic circumstances of each individual business may vary. Larger, more financially successful businesses would have a clear advantage over small businesses or businesses with thinner profit margins. It would also be difficult for a new business to enter into that market because it can take years to make a profit as a new business.

Even some countries with sectoral bargaining recognize that not every employer should be subject to these contracts. In Germany, employers are not required to join the association negotiating the agreement, so they can opt out of it.

• Finally, a one-size-fits all approach also limits the ability to compete for employees or for market share based on price and quality of a product or service. Some say sectoral bargaining may dissuade employee movement because other firms have no incentive to offer more competitive compensation or benefits packages. (See The Wall Street Journal, “Germany’s Labor System Would Be Difficult to Import to U.S.” (October 20, 2019).)

• Enforcement. Proponents of sectoral bargaining say unions also should be involved with the enforcement of labor laws.

Each of these ideas may have negative unintended consequences for workers and employers. Regarding unemployment benefits, the goal behind having unions run this benefit is to increase membership, which would therefore be an effort to have employees pay dues. Employees would feel pressured into financially supporting the entity in charge of their access to benefits. There have even been countries that have required union membership to get unemployment benefits. Second, unions in the United States largely cover specific industries, so determining which union would oversee benefits could lead to complications.

Regarding enforcement, there has been a general distrust of nongovernment entities enforcing labor laws. Issues have arisen in other areas. Attorneys have manipulated laws like the Unruh Civil Rights Act, Americans with Disabilities Act, and California’s Private Attorneys General Act (PAGA) for their own financial gain, to the detriment of workers. For example, PAGA data demonstrates that workers receive far less compensation with longer wait times through PAGA cases than if they had filed a claim with the state. Nothing in current law prohibits unions from helping workers navigate and file claims with the Labor Commissioner or Department of Fair Employment and Housing. Giving unions a more formal role could create perverse incentives that would benefit the union through increased membership over the interest of workers.

Regarding wage boards, California previously authorized and empowered an Industrial Welfare Commission (IWC), which developed orders governing minimum wages and hours of work. The Legislature in effect abolished the IWC in 2003, and much that had been subject to industry wage orders is now codified in the California Labor Code, which in turn is controlled by the Legislature.

The Legislature recently rebuffed a proposal that would have given significant powers to a fast food council comprised largely of worker representatives. AB 257 (Lorena Gonzalez; D-San Diego)) would have established a Fast Food Sector Council consisting of five government representatives, two employees, two employee advocates, one franchisor, and one franchisee — meaning employers would be outnumbered 2 to 1 by worker representatives. The council also would have alienated other interests that may have a stake in rules surrounding the industry, such as issues regarding privacy or environmental concerns. The council would have had broad power to establish industrywide law on wages, hours and other working conditions. It would have usurped any other regulations or laws, taking power away from the Legislature and state agencies.

Concerns about this immense power were raised in the Assembly Floor debate on the bill, which ultimately failed by three votes. The bill also would have allowed certain cities to establish their own local councils, creating different requirements in different parts of the state. Differing local requirements have caused administrative burdens for employers in other matters, such as sick leave and vaccine-related mandates.

Employees deserve the right to decide whether they want to be a member of a union and pay dues. The California Chamber of Commerce opposes policies that seek to strip employees of that right to choose and impose requirements on employers at the expense of small and new businesses.

California has robust, complex labor laws that are the strictest in the country. The CalChamber supports increasing enforcement mechanisms of the Labor Commissioner rather than outsourcing this role.