In 2011, the California Legislature passed and the Governor signed AB 341 (Chesbro; D-North Coast; Chapter 476, Statutes of 2011), a law establishing a statewide 75% recycling goal through source reduction, recycling and composting by 2020 and requiring all businesses and public entities that generate 4 cubic yards or more of waste per week to have a recycling program in place. In addition, multi-family apartments with five or more units also were required to form a recycling program. More than nine years later, California has not achieved its AB 341 goals for a multitude of reasons, including recent major changes to the global recycling markets. 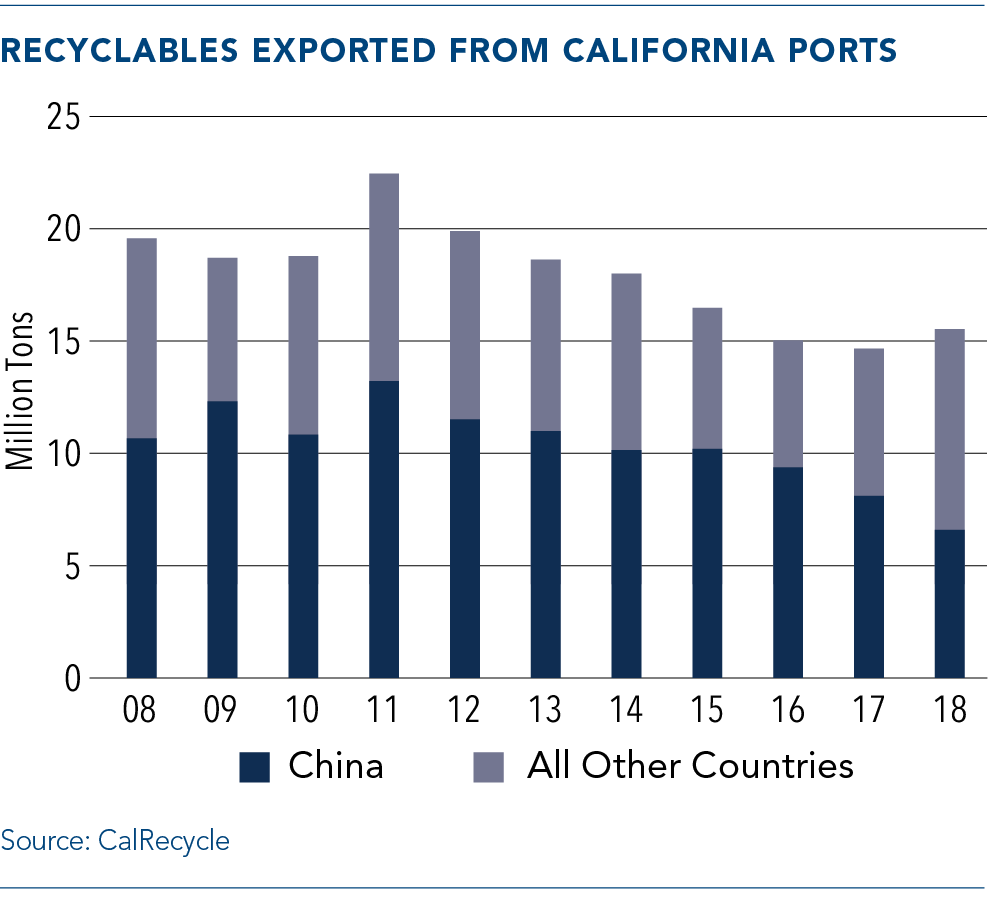 In 2017, China shocked many in the western world by announcing its National Sword policy banning the imports of 24 categories of scrap materials, including low-grade plastics and unsorted mixed paper, and setting strict 0.5% contamination standards for allowable bales of recyclable material. China’s National Sword policy substantially disrupted California’s recycling markets because for decades, the state relied heavily on China to purchase much of California’s recyclable commodities. Before China’s new policy, California was exporting as much as two-thirds of all curbside collected material to China and other foreign entities.

This new paradigm in the international recycling marketplace has in many instances lowered the worldwide price of some scrap materials. What was once a net positive revenue stream for many California local jurisdictions became a significant cost for them. In response, local jurisdictions raised curbside rates to counteract the declining international demand and value for certain scrap. Local jurisdictions cited China’s National Sword policy, rising labor and fuel costs, new infrastructure and compliance with SB 1383 (Lara; D-Bell Gardens; Chapter 395, Statutes of 2016), as the basis for having to raise curbside rates.

SB 1383 established targets to achieve a 50% reduction in the level of the statewide disposal of organic waste from the 2014 level by 2020, and a 75% reduction by 2025. The law provided CalRecycle the authority to adopt regulations setting stringent organic waste disposal reduction targets and to establish additional reduction targets for edible food. The Department of Finance estimated the cost to implement and build the infrastructure necessary to meet the mandates in SB 1383 would be approximately $20.9 billion.

The Legislature responded in 2019 with the introduction of SB 54 (Allen; D-Santa Monica) and AB 1080 (Gonzalez; D-San Diego), two identical pieces of legislation with the stated intent of reducing waste and pollution through source reduction, recycling and composting mandates.

For companies not in compliance, such as failing to meet recycling rates or failing to source reduce to the maximum extent feasible (as determined by CalRecycle), the bills granted CalRecycle discretion to offer a compliance pathway through “Corrective Action Plans.” A Corrective Action Plan would need to be approved by CalRecycle and could require actions such as shifting production away from packaging and product categories that do not meet the recycling rates, reaching a minimum content standard set by CalRecycle, or establishing a take-back system or deposit fee system for single-use packaging or priority single-use products that would increase the recycling rate of the material, to name a few.

For regulated entities that failed to enter into or comply with an agreed upon Corrective Action Plan, SB 54 and AB 1080 provided CalRecycle with authority to issue fines of up to $50,000 per violation per day. Additionally, retailers were expressly prohibited from selling any products whose packaging was not in compliance. Any packaging not meeting statewide recycling rates could have led to a ban on the product.

AB 1080 passed the Senate, but SB 54 failed to secure enough votes in the Assembly. Both bills ultimately died on the final night of the 2020 session, as AB 1080 never made it back to the Assembly for concurrence in Senate amendments after SB 54 failed.

For decades, California’s reliance on international markets allowed it to operate with limited recycling infrastructure. The limited infrastructure for managing and recycling material was built largely based on the Beverage Container Recycling Program and each year shrinks as more and more California beverage container recycling centers close. For example, in 2019, California’s largest recycling redemption center operator shut down 284 facilities and laid off 750 employees. When the value of certain scrap materials on the international market collapsed and local jurisdictions and businesses struggled to turn a profit, the repercussions of an underdeveloped recycling infrastructure became glaringly apparent. Without downstream outlets for many otherwise recyclable materials, companies in California began stockpiling scrap materials as they sought to find acceptable markets for the material.

California is home to 482 local jurisdictions, all of which have local control over their waste management systems. While many local jurisdictions offer single-stream curbside collection of recyclables, some do not offer any curbside recycling services. An increasing number of local jurisdictions also are passing ordinances banning certain materials, like expanded polystyrene and single-use plastic food ware. Companies can design for recyclability and compostability, but they cannot design packaging to comply with different local jurisdiction ordinances. Any legislation overhauling California’s recycling system should consider standardizing requirements to create a workable statewide circular economy.

In the early 1990s, several California communities pioneered “single-stream” recycling to simplify and encourage more household participation in the recycling system. Subsequently, large and small municipalities across the United States began single-stream programs of their own. The thought was that single-stream recycling meant households no longer had to painstakingly separate every material type, which was laborious and led to less participation. Instead, consumers could simply throw all their recyclables—whether paper, plastic, glass or metal—into a single bin, drag it to the street, and have it emptied each week.

Although single-stream recycling programs increased household participation in recycling, they came with some significant unintended consequences, one of which was substantial contamination. Today, the average contamination rate among communities and businesses hovers around 25%. Contamination has reshaped the international recycling market and created serious financial and environmental issues here in California. For example, consumer education could help to reduce contamination in a single-stream system by educating people on how to properly rinse packaging and remove food waste before disposal, as well as how to identify recyclable products versus garbage—which is more difficult than one might initially think.

Manufacturers of single-use packaging can help reduce contamination through design of their packaging to ensure recyclability at the local material recovery facilities.

A California resource and recovery company is leading efforts to qualify the “California Recycling and Plastic Pollution Reduction Act of 2020,” a ballot initiative to ban certain packaging types, mandate recycling rates and assess an up to $0.01 tax on every unit of single-use plastic packaging and plastic food ware.

The proposed ballot initiative is missing several key elements that the California Chamber of Commerce believes are critical to meaningfully overhauling California’s recycling system, including the need and pathway for siting additional and upgraded recycling infrastructure, as well as standardizing the program to create a uniform and meaningful statewide recycling program with statewide enforcement and recyclability requirements.

The CalChamber supports upgrading California’s recycling system to revitalize recycling and composting in-state. Any statewide policies regarding the management of California’s waste must be balanced and take into consideration the burden on companies and consumers in order to be effective and achieve the intended environmental benefits. The CalChamber supports maintaining legislative oversight to ensure that any proposed regulations complement other state goals and policies. 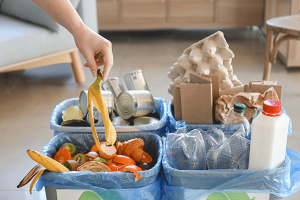 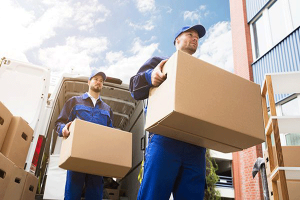