• Supply chains congestion expected to continue for the next 18 months. 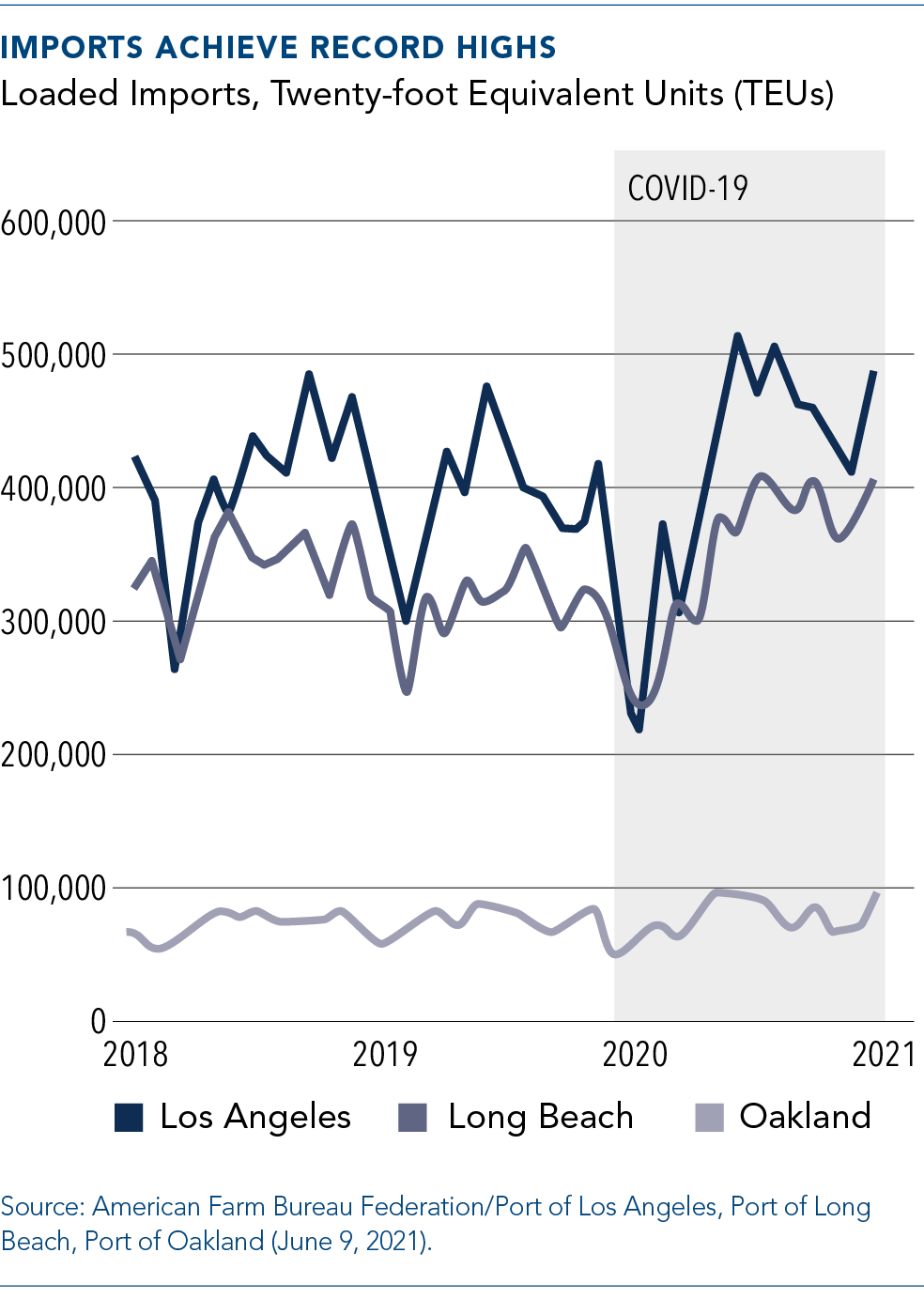 Fueled by a surge in consumer spending and driven by supply chain interruptions due to COVID-19, global transport of goods is facing a crossroads. The United States and California are not alone. Global supply chains have been put to the test since the COVID-19 pandemic shut down much of the world in March 2020. Pair that with general product shortages, a lack of shipping containers and chassis to move them, a lack of places to store those containers, labor shortages and an amalgam of other issues and you have a recipe for logjams and rising prices across the supply chain.

Shipping bottlenecks have been the most recent symptom in the supply chain crisis, with ports across the world experiencing backups. U.S. ports have had some of the highest congestion in the world. California feels this pinch more than most, as more than 40% of the nation’s imports and 30% of the nation’s exports come through the state’s major ports at Los Angeles, Long Beach, and Oakland, along with California’s smaller port systems up and down the coast.

For the global supply chain, which relies on a “just-in-time” delivery model, these delays have a strong correlation with the long wait times and shortages that consumers are experiencing in their day-to-day lives, affecting the world economy’s ability to avoid price shocks and increasing the cost of living across the United States and California.

In 2021, Long Beach and Los Angeles ports experienced a record number of 100 ships (compared with the usual one or maybe two) waiting to enter the port, reaching an all-time high in October. The city of Long Beach issued an emergency order in October 2021 allowing containers once they make their way into warehouses and container yards to now be stacked four high, instead of two. Then in November 2021, a working group of industry leaders introduced a plan for a new queuing process for container vessels to significantly reduce the number of backlogged ships at anchorage off the ports. The ships are now required to wait 150 miles off the coast and will now enter the arrival queue based on when they cross a line 20 nautical miles from the port.

Port backlogs have also occurred on the other side of the Pacific where, for example, Singapore experienced a 22% increase in ships waiting in harbor. The Asia/Pacific region also contended with typhoons and other weather phenomena causing delays. Europe experienced its own port congestion troubles, as trucker shortages and limited space kept ships waiting in harbor too.

In addition to port congestion, other issues have contributed to global supply chain delays. China experienced power shortages that affected production (The New York Times). The United Kingdom experienced a similar shortage of truck drivers, which combined with changing trade rules as Brexit took full effect in 2021, caused disruptions in the supply chain (CNBC). Parts of Asia experienced a diesel shortage in fall 2021, with rates skyrocketing over 64%, leading to driver strikes (Bloomberg). All these factors combined have resulted in exponential increases in freight rates, with prices more than quadrupling from the previous year (The Wall Street Journal).

In March 2021, international shipping lines first grabbed the world’s attention as the Ever Given ship, part of the Evergreen fleet, became stuck in the Suez Canal. An internet obsession ensued, as each day passed that the ship was lodged in the canal, more memes were shared of the failed voyage. After six days, the ship that had become wedged across the width of the canal amidst high winds, was finally freed. The whole ordeal brought all navigation of the canal to a standstill, disrupting trade globally. The Suez Canal Authority sought compensation of $550 million and reached an agreement with Evergreen after impounding the ship for three months nearby. In 2021, 50 ships per day, about 12% of global trade, travel through the canal. It was estimated that for each day of the Suez Canal blockage, an additional $9.6 billion worth of goods was disrupted, or $400 million every hour (CNBC).

On November 9, 2021, the Biden administration released a plan to try to combat congestion at U.S. ports, including California. The new guidance frees up federal funding already allocated for other projects to be used toward relieving the backlogs. This existing grant money can be used immediately to address the shipping crisis. The guidance also includes a program to modernize ports and marine highways, allocating $240 million in grant funding. It also seeks to identify projects for the U.S. Army Corps of Engineers at coastal ports and inland waterways, providing a roadmap for $4 billion in funding to repair outdated infrastructure and deepen harbors.

President Joe Biden addressed the global supply chain crisis at the G-20 at the end of October 2021, stating: “Solving this is going to take all of us — government and private industry, labor unions and research institutions.” Along with the guidance, the Biden administration had previously ordered the Port of Los Angeles to operate around the clock to relieve the growing backlog.

Most experts agree, however, that even with these new provisions, ports will continue to see delays resulting primarily from shifts in supply and demand as manufacturing, shipping, and transport continue to grapple with the COVID-19 pandemic worldwide. Secretary of Commerce Gina Raimondo said that it will likely be well into 2022 before there is relief in the supply chains.

The executive order built on earlier efforts in 2021 by the Governor’s Office of Business and Economic Development (GO-Biz) to ease supply chain issues by engaging the diverse network of stakeholders along the supply chain to discuss key challenges and identify short-term and long-term solutions.

Lastly, under the order, state agencies were directed to identify state-owned properties and other locations that could be available to address short-term storage needs once goods are unloaded from ships; to identify priority freight routes to be considered for a temporary exemption to current gross vehicle limits to allow for trucks to carry additional goods; and to create workforce training and education programs. The executive order also expedited implementation of 2020 legislation AB 639 (Cervantes; D-Corona), setting up a process to develop recommendations for mitigating the employment impacts of automation at the ports of Los Angeles and Long Beach.

In the 2022–2023 California budget, Governor Newsom is proposing $2.3 billion in state funding to help ease congestion and supply chain problems that continue to affect the California ports of Los Angeles, Long Beach and Oakland.

• $110 million for a training campus to support the workforce.

• $30 million in funding for operational and process improvements at the ports, which could include improving data connectivity between the ports for more efficient cargo movement and congestion reduction.

As global supply chains continue to recover from the initial shock of the COVID-19 pandemic, it is important to maintain coordinated efforts between governments and private sectors while weathering the current crisis. Diversifying trading relationships and countries where products can be produced can help alleviate strain on the system. Turning toward digitalization where available will be important for the modernization of supply chains. 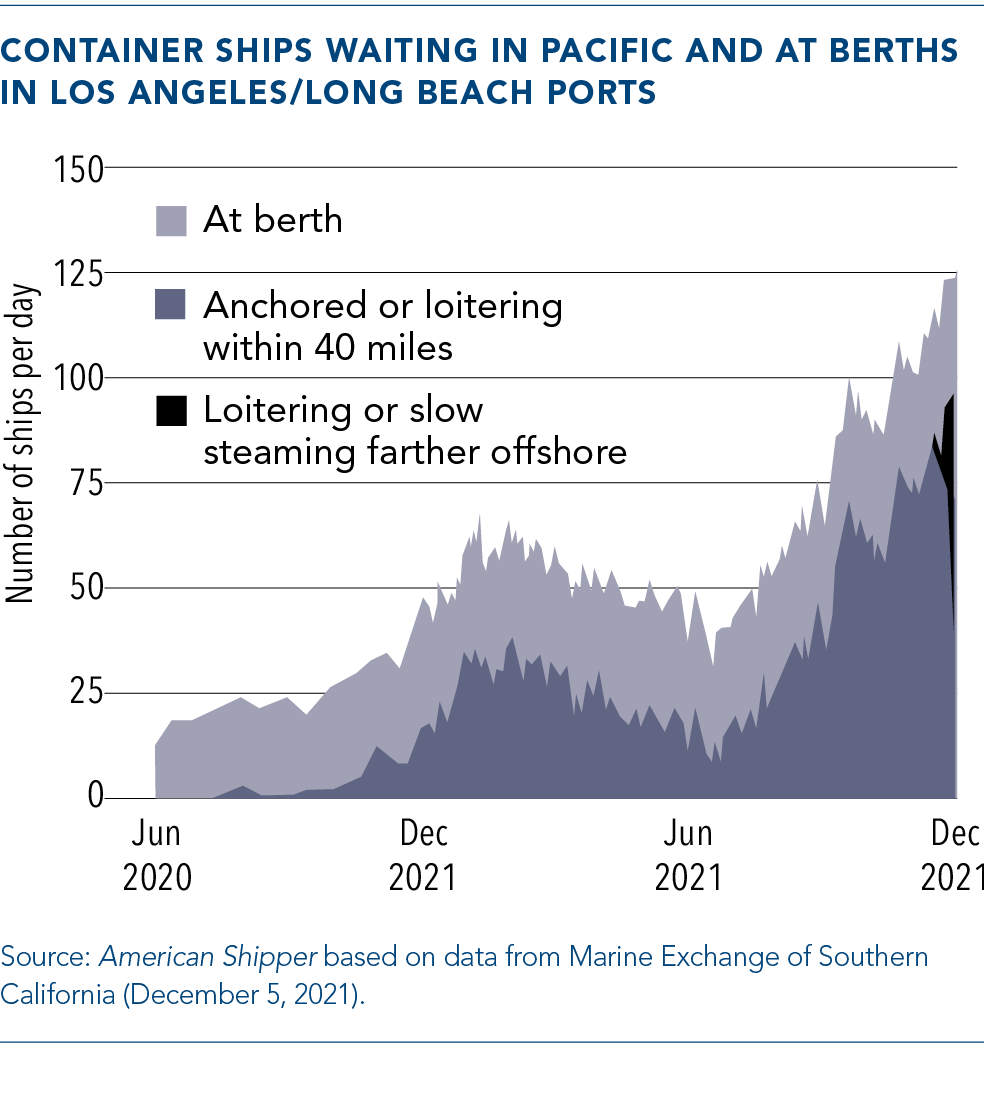 In a November 2, 2021 letter to the Governor Newsom and state legislators, the California Chamber of Commerce outlines a series of practical steps the state can take to ease the supply chain crisis and alleviate congestion at California ports.

Facilitate maximum port-to-port rail routes: All routes that connect to on-dock and near-dock rail services that serve California’s ports should be evaluated for weight exemptions and other measures to increase efficiencies. This should include all transfer container facilities and intermodal yards that connect California’s ports to the transcontinental rail system that transports cargo across North America.

Ensure that off-port storage is organized, secure and accurate: California should continue to work with the federal government and the ports to ensure sufficient tracking and tracing and adequate security at off-site locations during this temporary endeavor, along with a strong and accurate communications system. The state should also evaluate upgrades to information technology (IT) appointment systems which will help streamline pick up and drop off of containers. These measures will also serve to avoid bad actors taking advantage of short-term solutions and to reduce losses.

Work with ports and terminals to maintain feasible extended gate hours: Increasing predictability of gate hours will provide more time for the trucking community to adjust to extended hours and provide shorter dwell time for drivers. The administration should work with the ports and marine terminal operators to identify terminal gate hours that can feasibly be kept open for at least the next 90 days, including weekend gate hours.

Encourage local government land use variances/permit streamlining: Once it has identified surplus properties, the state should evaluate barriers to temporary use. The state should also identify policy and/or financial mechanisms to encourage streamlining of entitlements or permits and remove unnecessary land use restrictions for this temporary use. The administration could also consider setting timelines for use of each property depending upon proximity to the ports and/or priority routes. This is likely to be a multi-year supply chain crunch, the CalChamber pointed out, which will interfere with the normal business operations and planning for facilities in California and elsewhere. Identifying which properties are targeted for staging and the length of time for each category will be helpful in allowing companies to plan for the medium- and long-term.

The administration should set a timeline for identifying and training additional drivers (medium term): The administration should set dates for interim milestones for identifying and tracking driver-shortage issues. In addition, California could look at temporarily encouraging/allowing out-of-state trucks to assist at the ports, while continuing to provide incentives for in-state hiring.

The state must also evaluate supply chain issues in critical sectors. The administration should continue to work with stakeholders to evaluate choke points in the supply chain, in addition to issues inherent to port congestion. Costs, interstate travel, and ensuring consistency across transportation sectors may also be a factor in supply chain delays. For example, agricultural goods represent some of the largest share of exports. On-time export of food is integral to keeping costs down in California as well as ensuring California remains a leader in the agricultural sector.

In addition, the state should evaluate investments in water-side infrastructure capacity and chokepoints, including evaluating funding support for dredging, navigational infrastructure, and pilotage system overhead, which other ports in the United States have implemented in recent years.

Align electrification timelines with automation upgrades: Recent evaluations rank California’s ports amongst the lowest in the world based on time at berth. Although the California ports are attempting to operate efficiently with the tools they have at hand, significant infrastructure investments will be necessary to continue to achieve efficiencies on par with world leading ports, in addition to east coast and southern ports in the U.S.

Increase mobility through priority routes: Once identified, California should immediately and aggressively identify and propose projects to address freight bottlenecks within these priority freight routes. Bottlenecks that create inefficiencies result in congestion and delay for both commercial and personal vehicles using the highways in those trade corridors and excess air emissions. The state already identified numerous priority freight routes through its latest update of the California Freight Mobility Plan. The state can build upon this work and that already performed by local metropolitan transportation organizations through their Regional Transportation Plans, including identification of priority bottlenecks.

The CalChamber supports free trade worldwide, expansion of international trade and investment, fair and equitable market access for California products abroad, and elimination of disincentives that impede the international competitiveness of California business.

The CalChamber will continue to work with stakeholders, the administration, legislators and other interested parties to achieve further progress on easing port and supply chain congestion.