A Prescription for Pharmaceutical Cost Containment

A Prescription for Pharmaceutical Cost Containment

Health care spending in the United States is on the rise and a major component of that increase is escalating prescription drug costs. By no means is California immune from this spending surge. Health plans pay more money, year after year, for prescription drugs, which is a major element in explaining why employer-sponsored health plan premiums are increasing.

When the legislative year began in 2020, Governor Gavin Newsom proposed to create the Office of Health Care Affordability. The office was intended to stem the tide of high health care prices in California. When COVID-19 struck in March 2020, focus turned away from the office and it took a backseat to crisis management and anticipated budget shortfalls. However, two pieces of legislation—one successful and one failed—attempted to tackle the prescription drug cost issue. Laws and efforts like those seen in 2020 will likely continue in 2021.

“Prescription drug costs are a major contributor to the overall cost and affordability of health care,” said DMHC Director Shelley Rouillard. “Health plans paid more than $400 million more on prescription drugs in 2018 than they did in 2017. This rate of increase outpaces the increase in overall medical expenses, impacting the affordability of health care.”

When looking at national trends, the Centers for Medicare & Medicaid Services’ National Health Expenditure Data indicates that prescription drug spending increased to $333.4 billion in 2017—a 40% increase from 2007. The Centers for Medicare & Medicaid Services also projected that such spending will continue, climbing to $1,635 per capita by 2027—an increase of 60%. The price of prescription medications rose 62% between 2011 and 2015.

In 2020, two pieces of legislation attempted to address this issue. SB 852 (Pan; D-Sacramento) and AB 2203 (Nazarian; D-Van Nuys) focused on drug costs in an attempt to rectify the health care cost increase trend.

SB 852 was signed into law by Governor Newsom in September 2020. The legislation requires the California Health and Human Services Agency (CHHSA) to enter partnerships resulting in the production or distribution of generic prescription drugs, including insulin.

SB 852 requires that these generic drugs be produced or distributed by a drug company or generic drug manufacturer that is registered with the Food and Drug Administration (FDA). The bill further requires the CHHSA to enter partnerships to produce a generic drug only at a price that results in savings, targets failures in the market for generic drugs, and improves patient access to affordable medications. When identifying generic drugs to be produced, the CHHSA would also be required to consider drug pricing reports from the DMHC and Department of Insurance and pharmacy spending data from Medi-Cal, for which the state pays the cost of generic drugs.

The intent of the bill is to leverage California’s purchasing power to increase generic drug manufacturing and, ultimately, lower costs. “The cost of health care is way too high. Our bill will help inject competition back into the generic drug marketplace—taking pricing power away from big pharmaceutical companies and returning it to consumers,” said Governor Newsom. “California is using our market power and our moral power to demand fairer prices for prescription drugs.”

According to the bill’s author, Senator Richard Pan, “[the] COVID-19 crisis brought to light glaring gaps in supplies of essential, lifesaving drugs, and medical equipment and supplies. Setting up a structure in which the state of California has its own drug manufacturing capability will help prepare the state for the next pandemic.”

It remains unclear which drugs the state would manufacture or purchase. However, the new law does require these partnerships to result in savings and improve patient access to medications. The CHHSA must provide a status report to the Legislature by July 1, 2022 outlining all the drugs targeted under this bill. The report also must contain an analysis of how the activities of CHHSA may affect competition, access to targeted drugs, the costs of those drugs, and the costs of generic drugs to public and private purchasers.

Mandates and Cost-Sharing Caps Not the Answer

AB 2203 was authored by Assembly Member Adrin Nazarian and attempted to address increasing insulin prices by placing a copay cap on its prescriptions. Specifically, AB 2203 would have established a copayment cap and prohibited health plans from imposing cost sharing for insulin beyond $50 for a 30-day supply and no more than $100 per month total, regardless of the amount or type of insulin prescribed.

There is no doubt insulin prices have increased dramatically over the years. According to the California Health Benefits Review Program (CHBRP), the average list price of brand-name insulin nearly tripled between 2007 and 2018, increasing by 262%. While this is certainly a sizable price increase, CHBRP’s analysis estimated that nearly two-thirds of DMHC and California Department of Insurance (CDI) enrollees who use insulin have plans with cost sharing already below AB 2203’s proposed caps. However, 38% of enrollees who use insulin, at baseline, would experience changes in cost sharing.

Despite the bill’s noble intentions, it would have increased costs. Opponents, including the California Chamber of Commerce, pointed out that AB 2203’s proposed cost-sharing caps would have increased health care premiums for employers and employees without addressing the actual problem of drug price increases. CHBRP analyzed the cost impact of AB 2203 and concluded that if the mandate went into effect, it would increase employer health care premiums by nearly $11 million. Individual premiums would increase more than $6 million and employee premiums also would increase over $3 million. Keep in mind, nearly two-thirds of DMHC and CDI enrollees are already below the proposed cost sharing caps, but all enrollees would have had their premiums increase.

In addition to increased premiums, another shortcoming from the opponents’ perspective was that AB 2203 forced health plans to shoulder the expense and burden of paying for insulin. Drug manufacturers still would have had the ability to charge any amount they deemed appropriate for insulin and insulin users would have been insulated from cost increases by the copay cap. This left health plans in the position of paying the remaining cost, and that increased expense ultimately would have been passed on to employers and employees by way of increased premiums.

There is no disagreement that health care costs are rising and making it more difficult for employers and their employees to afford quality, accessible care. Maintaining a viable health insurance market with affordable and accessible pharmaceuticals is important. However, mandates that attempt to contain upfront drug costs on participants in the health care market, rather than the manufacturers who produce it, will ultimately increase premiums on employers and employees. The CalChamber will continue to promote efforts to contain health care costs and improve access to high-quality care while avoiding added burdens and higher costs on employers. 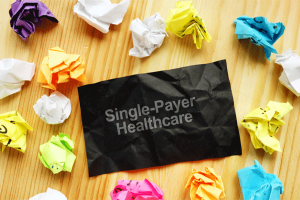 Single-Payer Health Care – Brought to You by 40 Million Payers